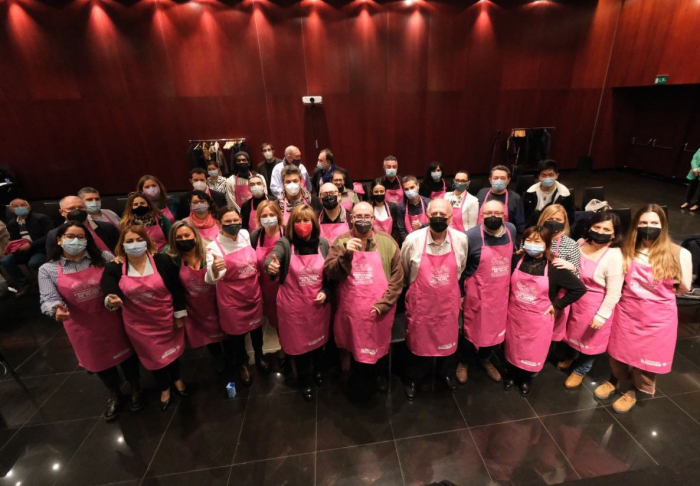 They are back, The Tapes Route and the Competition of Cocteleria "City of the Hospitalet"

The Tapes Route and drink for 3,50 euros.

This morning two of the gastronomic events more important of which they are celebrated in The Hospitalet have been shown: the Tapes Route and the Competition of Cocteleria for Professional Youngsters Trophy "City of the Hospitalet". These initiatives retrieve its usual formats after the pandemic forced to cancel the edition of 2020 and to adapt that of 2021.

The presentation, which has been made in the Hotel Porta Fira, from the city, has counted on the mayor, Núria Marín; the town councilor of the Area of Employment, Company, Tourism and Social Economics, Rocío Ramírez, and the cook Carlota Claver, as a bridesmaid of the routes of lids of this year.

The Tapes Route propose the citizenship culinary proposals of establishments of the city at an only price and coincide with the local festivities of each neighborhood. In all them there is a participative process for choosing the most popular, creative lids, of gastronomic and tasty quality. Moreover, draws are made among the persons who participate. This initiative develops with the collaboration of the Guild of Hotel Business of The Hospitalet and the blog The Hospitalet Gastronómico. This year, the main novelty is the incorporation of Collblanc-la Torrassa to the routes of lids in the neighborhoods.

The goal is to promote the sector of the hotel business and the restoration, one of the economic engines of the city, and to introduce its extense gastronomic offer of quality.

Primavera de Tapes , that he is made every year coinciding with the Parties of Spring, it is the one that one gathers senior number of participant establishments and the calendar of gastronomic routes is also the one that it opens.

In this edition, the Primavera de Tapes it will be of the 21st in the 24th of April and will have the participation of 35 establishments of the city with proposals of traditional cooking, creative and of fusion. The price of the Tapa and the drink will be from 3,50 euros.

The last gastronomic route of the year is In the autumn, Platillos!, that it is made in all the city and that this year it will develop of 1 in the 30 November.

Competition of Cocteleria for Professional Youngsters Trophy "City of the Hospitalet"

The Competition of Cocteleria -that he organizes the Town Council of The Hospitalet with the collaboration of the Club of the Barman- he arrives this year in its 37th edition. To the competition schools of all Catalonia participate and people will act on the 24th as April in the Hotel Renaissance Barcelona Fira, of the Hospitalet, within the framework of the Parties of Spring.

The participants have to elaborate and to explain a cocktail predinner (aperitif), in accordance with the bases established by the International Bar Association (IT WENT). Many of the winners and participants of this competition have gone to working in the best premises of the sector.